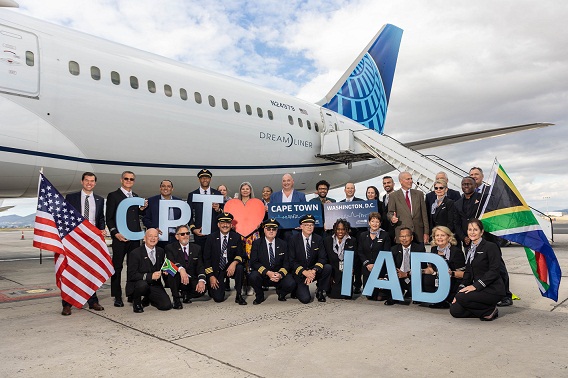 United Airlines has launched its new nonstop three-times weekly year-round service between its Washington/Dulles hub and Cape Town International Airport, with the arrival of the first flight into Cape Town today.

United first launched flights from Cape Town in December 2019, and the new service to New York/Newark quickly became one of the airline’s flagship international routes. The airline later built upon this success in Africa with the launch of flights between Johannesburg and New York/Newark in June 2021, as well as new services between Accra and Washington D.C. in May 2021 and from Lagos to Washington D.C. in November 2021.

“We are excited to launch our new service between Washington D.C. and Cape Town, which builds on our industry leading network across the Atlantic” said Patrick Quayle, United’s Senior Vice President Global Network Planning and Alliances. “As the largest airline between
the U.S. and South Africa, we are proud to link our countries’ diplomatic and legislative centres and look forward to benefiting the thriving travel and tourism industries.”

“The Western Cape’s post-Covid-19 recovery continues its take off,” said Alan Winde, Premier of the Western Cape Government. “Our province’s lucrative tourism sector – a key economic lever to growth has been given another boost thanks to United Airlines. The launch of the airline’s non-stop service between Washington D.C. and Cape Town is another indication of the sustained surge in demand for flights to the Mother City – yet more confirmation of its status as a world-class tourist destination. Earlier this year, United expanded its three weekly non-stop flights between Cape Town International Airport and New York/Newark to year-round service. We are thrilled it has decided to spread its wings even further in the Western Cape. I would like to thank United Airlines for playing an important role, not just in reviving our economy after a turbulent few years, but also for giving the country’s aviation industry some much-needed help too. We look forward to nurturing our relationship with the airline going forward.”

“I am delighted to welcome United Airlines’ passengers to Cape Town as they disembark from the first-ever nonstop flight service between Washington D.C. and Cape Town,” said Geordin Hill-Lewis, Executive Mayor, City of Cape Town. “As the capital of the United States, this is an important flight for government and commerce. Travellers from the East Coast of the U.S. – and, indeed, all over North America – now have unprecedented access to Cape Town’s unique tourism and business offerings. Slowly but steadily, through travel options such as this flight, Cape Town is becoming a key gateway to the African continent.”

“The addition of United’s Washington/Dulles to Cape Town service, alongside their existing New York/Newark to Cape Town route, will enable the continued expansion of economic opportunities for Cape Town and the Western Cape,” said Wrenelle Stander, CEO of Wesgro and spokesperson for Cape Town Air Access. “The United States is a key source market for tourism, trade and investment for the province. We look forward to the bumper summer season ahead, and we would like to thank United Airlines for its continued commitment to our destination.”

“The US travel market is a growing one and we are pleased about the new United Airlines route connecting Cape Town and Washington D.C.,” said Mark Maclean, Regional General Manager, Cape Town International Airport Cluster 2. “The Cape Town International Airport team continues to collaborate with airlines to offer passengers a reliable and high-quality service. We wish the airline every success as it commences this new route.”