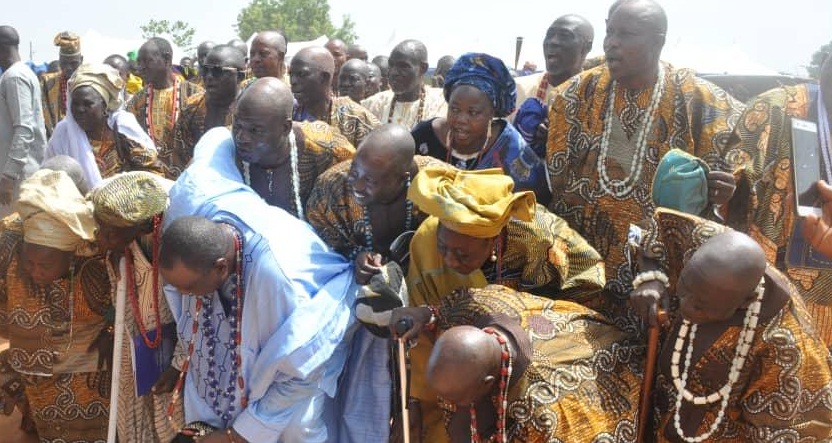 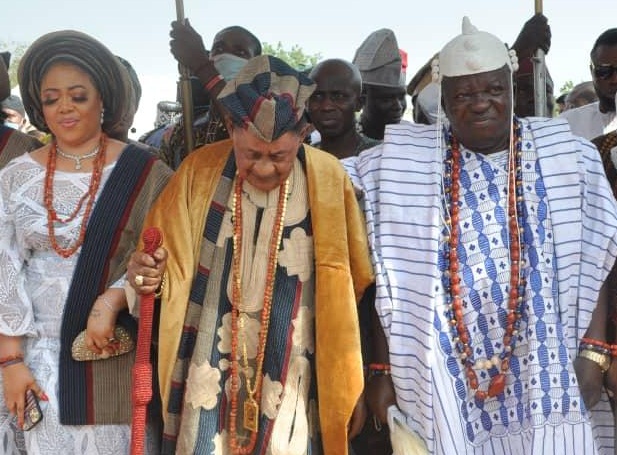 The ancient town of Saki was agog penultimate Wednesday, April 7 as the Alaafin of Oyo, Oba Lamidi Adeyemi III, led over fifty Yoruba Obas and other prominent Yoruba leaders to the town for the Beere festival.

Beere festival is an age long traditional festival lasting nine days, celebrated by the Okere and the people of Saki, bringing together indigenes from home and in diaspora to receive royal blessings.
While congratulating the people of Saki and the monarch, Okere of Saki, Oba Khalid Olabisi Oyedepo, Oba Adeyemi, prayed for peace and tranquility in the town, adding that Saki is known for its rich cultural heritage.
Underscoring the importance of culture, the first class traditional ruler identified a non-challant attitude to upholding core values as a causative factor of moral decadence and other societal problems in contemporary times.
According to him, preservation of culture and traditions play an important role in ensuring that a society’s unique identity is not lost, thus encouraging generation transfer.
While stressing the need for the continued preservation of the rich culture of the people, Oba Adeyemi said the cultural identity of the people should be preserved and projected to the world at all times in order for them not to lose their identity.
In his speech the Olowu of Kuta, Oba Adekunle Makama commended the Okere for the wonderful cultural event, which he encouraged other Royal Fathers to emulate in their various kingdoms.
In his welcome address, Chief host and traditional ruler of Saki town, Oba Khalid Oyeniyi Olabisi Ilugbemidepo Oyedepo III, reaffirmed his commitment to the promotion of cultural values and customs that properly portray the true identity of Saki people.
According to the monarch, the significance of the festival is to pray for tranquility and peaceful coexistence in the community during the nine days it normally lasted.
“As you can see, all the sons and daughters of Saki from far and near are rejoicing, it is like a homecoming where they come together to celebrate the ingenuity of people of Saki
The first class traditional ruler also used the opportunity to appeal to youths to desist from drug abuse and other social vices.
Earlier in his remark, Chairman of the occasion, Mr. Ahmed Raji (SAN) advised the Federal Government to summon an emergency meeting of all stakeholders to solve and put an end to the lingering security challenges in the country.
While congratulating the Okere and the people of Saki, Raji emphasized the importance of culture preservation, and the vital role it could play in bringing peace to communities.
Among other dignitaries that grace the occasion are; Prof. Adeolu Akande, Chairman, National Communications Commission board, the Chief Judge of Oyo State, Justice Munta Abimbola, Justice Mohammed Owolabi, Prof Hamdallat Olaniyan, Sen. Abdulfatah Buhari, Rep members Jide Olatubosun , Shina Abiola-Peller, Alhaji Jimoh Bioku of Baoraj Pharmacy.