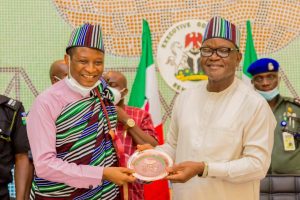 The NCPC boss intimated the Governor that he was in the state to seek for more sponsorship of Pilgrims to the Holly land. His words,” I am glad to seek your support for the Pilgrimage of 2020′”.
He emphasized the fact that NCPC being  the apex Christian faith based agency is being used to evangelise on the importance of Christian pilgrimage to the Holy Land.
He described NCPC as a  divine institution. According to him” we are here on the basis of divinity. He reaffirmed that Pilgrimage adds to our faith as Christians and encourages us to live a morally transformed life.
The NCPC helmsman affirmed that the Benue State Governor had been an advocate for the safety of the Benue people.
He commended the Governor for his continued support for Christian Pilgrimage.He solicited  the Governor’s support for the Commission,s  North Central Zonal office which comprises Benue, Nasarawa, Plateau,Kogi,Niger and Kwara.
In his remarks, the Executive Governor of Benue State Dr Samuel Ortom congratulated the NCPC boss for his well deserved appointment. He equally thanked ,Mr President for appointing him as the Executive Secretary of NCPC.
Dr Ortom said the NCPC boss is highly qualified to serve as the Executive Secretary of NCPC having meritoriously served in various capacities at different levels in the zones and at the national level as a church  leader.
He noted that the office of the Executive Secretary of NCPC is very sensitive. According to him,” apart from the physical, it also has spiritual importance which is more important than anything else”.
He noted that the Executive Secretary has the dual responsibility to unite the church by virtue of his office.
He reiterated that Benue State is predominantly a Christian state  and would do everything possible to advance the cause of NCPC and Christian Pilgrimage.
Governor Ortom urged all well meaning Benue indigenes to encourage and sponsor Christians who may not be able to sponsor themselves  to the Holy Land.
In the words of the Governor,”We want to assure you that we will stand by you and we will continue to pray for you”
One of the highlights of the courtesy visit was the decoration of the Executive Secretary in Tiv costume by the Governor and his proclamation as honourary citizen of Benue State in  the presence of the members of the state Executive Council.
The NCPC boss was accompanied on the Sensitisation visit by the Director of Operations, Rev Amos Yohanna, the Director of Mobilisation, Mr Chris Udegbunam, the Head , Media and Public Relations, Celestine Toruka, the Head Security Unit , Hosea Allahbamu and the Head Protocol Mrs Charlene Makai.