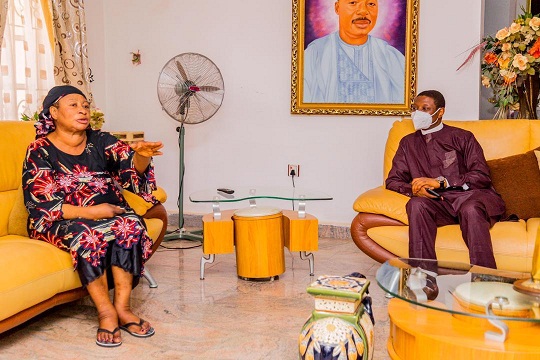 The Executive Secretary of the Nigeria Christian Pilgrim Commission, Rev Yakubu Pam paid a condolence visit to the family of late Senator Sati Gogwim in Jos, Plateau State capital, on 1st May ,2021 .

The Executive Secretary and his entourage were warmly received by the widow of the late Senator, Mrs Margarate Gogwim in their residence .

In the comforting words of the NCPC boss,” we are here to commiserate with you our mother on the demise of an elder statesman “.
He described the late Senator as a man of peace and a unifyer who represented not only Plateau State in the National Assembly well, but the entire North Central.

He consoled Mrs Gogwim with the comforting words of God that “we are all Pilgrims on earth’ that would certainly die one day to meet our creator.

He further affirmed, ” we are here to console with you and to let you know that no amount of lamentation and mourning will change the situation, rather, you should put your trust and hope in the Lord because He alone is the comforter”.

The NCPC helmsman prayed that the Lord would console and comfort her and the entire family in this moment of their bereavement.
Responding, Mrs Gogwim thanked the NCPC boss and his entourage for considering it important to pay them a condolence visit.

She thanked God for her late husband whom she said lived a life worthy of emulation.
She prayed that the Lord Almighty would continue to bless and protect Rev. Pam and his team.

He slept in the Lord in the first week of April, 2021 after a brief illness and was buried last Saturday.