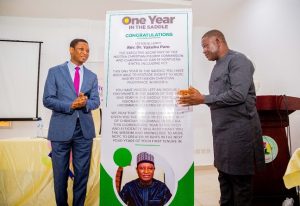 The Executive Secretary, Nigerian Christian Pilgrimage commission(NCPC), Rev Yakubu Pam, on Wednesday, commemorated his one year anniversary in office at the NCPC headquarters in Abuja.

The NCPC boss who resumed office on the 7th of July, 2020, explained that his administration has embarked on advocacy visits to most key drivers and stakeholders across the country.

According to him “We started with Southern Kaduna and we have gone to Benue. Our joy is that we have laid the foundation in these places and so many people are building on the foundation. We also went to Lagos. We were an instrument in the hands of God to make sure that we quench down the destruction that followed the End SARS crisis”.

“I must say, the advocacy visits paid off and became an added impetuous to renewing the spirit of pilgrimage in the country”, he added.

Rev Pam further reiterated the institution’s resolve to embark on its 2020 pilgrimage to Jordan this month of July, 2021. “The decision to go on pilgrimage became crucial after reviewing the prevailing predicament of the country”, he said.

NCPC helmsman explained that due to the challenges surrounding the COVID-19 pandemic in 2020, pilgrimages had been suspended, pending when situations returned to normalcy.

Rev Pam also stated that one of the reasons for choosing Jordan as the destination for pilgrimage is in accordance to the mandate of the agency to visit all known Christian holy sites where Christ worked during his ministry.

According to him, “This is by far a novel initiative which the commission is introducing under my stewardship. Jordan played an important role in biblical history being the centre where Jesus began his earthly ministry”.

The NCPC boss also referenced the method the agency is putting in place to ensure that only true intending pilgrims are selected to take part in the exercise.

He said, “Using our local screening to interact with people in a locality is one way. If you are a bad person, the story will definitely be out. If you’re truly an intended pilgrim, it will be known.
Beyond that, We are going to have 3 days seminar, creating awareness on what we want and don’t want during the pilgrimage in Jordan. One of the thing we don’t want is abscondment. We will let the people know that”.

On how many pilgrims are expected to take part in the pilgrimage, he said; “we are still counting. There are so many people that are picking interest. Even right now, parliament are compiling the list. We can’t tell you the figure for now, until we have started lifting the intended pilgrims”.