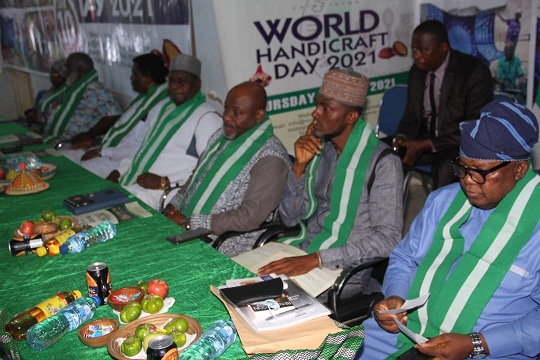 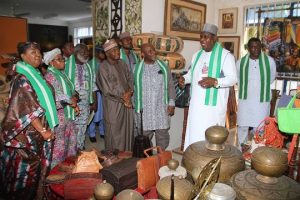 Director General, National Council for Arts & Culture (NCAC), Otunba Runsewe (2nd right) the acting President of Federation of Tourism Associations of Nigeria (FTAN) Mr. Nkereuwem Onung (first right), Dr. Cornel Agim of Nsibi Gallery and other dignitaries on a tour of the Arts and Craft Gallery during the World Handicrafts day in Abuja

The celebration of the World’s Handicrafts day Thursday June 10th, should be used to reflect on the founding principles of the World’s Craft Council which is mainly to foster economic development of crafts through crafts related activities in all its regions.

The Director General of National Council for Arts and Culture, Otunba Olusegun Runsewe, OON, made the call in Abuja at the occasion to mark the World Handicraft Day in Abuja.

Otunba Runsewe who doubles as the President of the World Craft Council, African Region, said the World Crafts Council is a non-profit, non-governmental organization which was found in 1964 to promote friendship, foster economic development through income generating craft related activities, organize art-related exchange programmes and exhibitions, all tailored towards encouraging and advising craftsmen around the world.

Runsewe said, since his assumption of office as the President of the Council in the African Region, he has continued to work tirelessly towards integrating key players in the Arts and Crafts sector towards promoting the best of African’s Arts and Craft products and popularizing them all over the world.
Otunba Runsewe who has brought his dynamism and strength of character to bear in making the International Arts and Crafts Expo (INAC) , a global fiesta where stakeholders all over the world meets to network and exchange views and experiences on global best practices in Arts and Crafts.

“Apart from robust and strategic engagement with foreign missions in Nigeria to create the required synergy beneficial to all, we have also led advocacy campaigns in South Africa, Ghana, Botswana, Burkina Faso and so on”, the President of World Craft Council, Otunba Runsewe stated.

Runsewe reiterated the need for government to increase its funding to the Arts and Crafts sector as very little capital is needed by practitioners for takeoff.

According to him, “oil is good but exhaustible, but Arts and Crafts is inexhaustible.”

In his paper titled:“Economic Importance of Crafts” the keynote speaker, former lecturer in the Department of Fine Arts, Ahmadu Bello University Zaria, Dr. Cornel Agim, enumerated the economic value of Arts and crafts to include; creation of employment, creating new skills, building and amplifying the economic harmony through cultural exchanges as well as playing a major role in generating and sustaining a globally engaged economy.

Other resource persons who spoke at the event said it would be shocking to note that most of the things that make people seek tourism to other countries are available in Nigeria, thus underscoring the need to promote domestic tourism.

Participants at the occasion were drawn from selected secondary schools within the FCT, stakeholders in the industry, media practitioners and the members of the diplomatic community.

The World Craft Council is organized into five regions, namely Asia, Europe, Africa, Latin America, North America and Africa.
Guests were treated to a musical display by the Performing Arts Department of the National Council for Arts and Culture.
The world handicrafts day is celebrated all over the world between the 10th – 17th June every year.