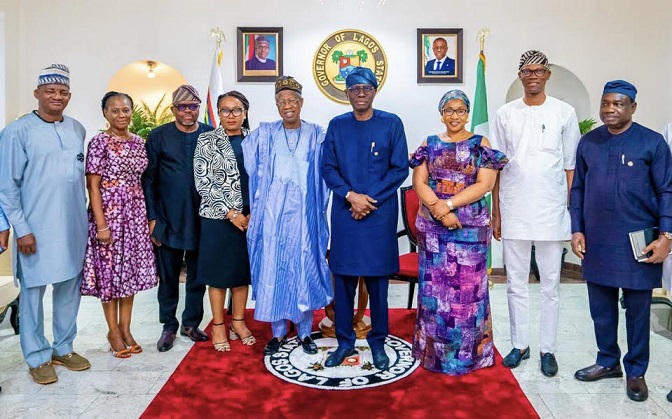 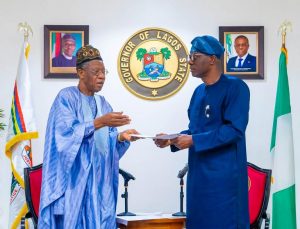 Minister of Information and Culture, Alhaji Lai Mohammed (left), and Lagos State Governor, Mr. Babajide Sanwo-Olu (right), when the Minister paid an advocacy visit to the Governor on the UNWTO Conference in Lagos on Thursday.

The Minister of Information and Culture, Alhaji Lai Mohammed, has solicited the support of the Lagos State Government towards the successful hosting of the United Nations World Tourism Organization (UNWTO) Global Conference on Tourism, Culture and the Creative Industries, scheduled to hold at the National Theatre, Lagos, 14-16 November 2022.

The Minister, who led some members of the conference’s Planning Committee on a courtesy visit to the Lagos State Governor, Mr.Babajide Sanwo-Olu on Thursday, said Lagos was selected as the host city because of its premier role in tourism, culture and the creative industries.
“While Nigeria is the host country of the inaugural edition of this global event, Lagos is the host city, which is very fitting,
considering the premier role of the state in tourism, culture and the creative industries,” he said.
Alhaji Mohammed said Nigeria won the right to host this event in 2021, during the 64th meeting of the UNWTO Commission for Africa (CAF), held in Cape Verde, adding: ”Granting Nigeria the hosting right is a recognition of the country’s growing status, acknowledged globally, in culture, tourism and the creative industries – which comprise many sectors, including music, film, advertising, animation, architecture, design, gaming, gastronomy, performing arts, software and interactive games as well as radio and television.”
He said the conference will bring together top executives of the UNWTO, Ministers of Tourism, Culture, Arts and the Creative Industries from the 166 member states of the organization, international and local stakeholders and the media, among others.
The Minister listed some of the socio-economic benefits that Nigeria will derive from the conference as showcasing Nigeria’s tourism, culture and creative assets; projecting Nigeria’s image as a safe and desirable destination for leisure and business; consolidating on Nigeria’s relationship with the UNWTO and its member states, generating foreign exchange and creating direct and indirect jobs.
He said the conference will also highlight the restart of travel and tourism in a safe and seamless manner after the unprecedented impact of the Covid-19 pandemic, which resulted in a near collapse of the sector; foster interaction and exchange of  ideas and best practices with key industry players; and create opportunities for the training of public and private sector tourism officials.

Alhaji Mohammed said the choice of the National Theatre, which is the hub of arts and entertainment in Nigeria, is most appropriate as the UNWTO conference will mark the return of the iconic edifice to its role, following the ongoing $100-million rehabilitation of the edifice, and the construction of hubs for music, film, fashion and IT by the Bankers Committee and the Central Bank of Nigeria.
“Your Excellency, please permit me to specially recognize the role of the Lagos State Government in the ongoing restoration of the National Theatre to its former glory. The Lagos State Government is providing invaluable support in partnership with the proponents of the Lagos Creative and Entertainment Centre – the project conceived to refurbish the National Theatre and build a new community of facilities for the fashion, film, music and IT sectors,” he stated.
In his remarks, Governor Sanwo-Olu expressed the willingness of Lagos State Government to partner with the Federal Government to ensure the success of the UNWTO Conference through the provision of resources and manpower.
He said the state government has already keyed into the conference by dedicating November as the month of Arts and Culture, as it will be hosting the National Festival of Arts and Culture, unveiling the JK Randle African Museum and holding an International Art Exhibition, among other events, within the period.
Governor Sanwo-Olu was accompanied by his Chief of Staff, Mr. Tayo Ayinde; the Commissioner for Information, Mr. Gbenga Omotosho, the Commissioner for Tourism, Arts and Culture, Mrs. Uzamat Akinbile-Yusuf, among other state officials, to receive the Minister and other members of the Planning Committee.