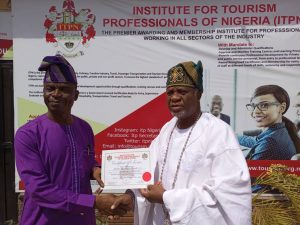 The National President of the Institute for Tourism Professionals of Nigeria (ITPN), Chief Abiodun Odusanwo FITPN has extolled the virtues of Otunba Ayodele Olumoko as a dedicated Fellow of the Institute who has put in his very best to place the Institute on a sound footing during his official induction as the National Vice President, South West zone of ITPN.

Chief Odusanwo who made the commendation while presenting the Certificate of Office to Otunba Olumoko at the Headquarters of the Institute in Abuja on Thursday 6th January 2022, said Otunba Olumoko has been one of the founding fathers and promoters of culture and tourism in the country and whose contributions has impacted positively well on ITPN in the upliftment of its tenets and ideals for the growth of the institution.

Speaking further, Chief Odusanwo called on other members of the Institute to emulate Otunba Olumoko by remaining steadfast as it’s ambassadors in the promotion of its aims and objectives to the larger Nigerian society and importantly, to critical key players and stakeholders in the travel, tourism, culture, hospitality and creative industry as well as its allied branches.

He noted that ITPN has four major mandates which are – to develop and administer Qualifications; approve and monitor training centres and learning providers as certificate Awarding body; to provide continuous professional development for private sector operators and public service personnel and to award recognized certificates and membership for every category of staff at different levels of skills in the tourism, and allied areas of the industry.

In his acceptance speech, Otunba Olumoko said he felt highly honoured with the continuous call to professional service which according to him will spur him into offering greater and better services to the Institute in particular and the country’s travel, tourism and hospitality industry at large.

He noted that tourism, especially cultural-tourism remains, one of the country’s untapped goldmines that if properly harnessed, has the potential to lift millions of Nigerians out of poverty through job provisions and employment opportunities.

Otunba Olumoko then called on all key players and stakeholders in the industry to join hands with ITPN in its efforts to enhance professional practices and conducts of both private sector practitioners and public service personnel to enable the industry provide better quality service delivery as well as help in salvaging Nigerian economy for better growth and development.

The Institute for Tourism Professionals of Nigeria is the Nigerian premier national certification and professional membership body for hospitality, travel-tourism and allied occupations. It represents members working in the public, private and non-profit making organizations which ensures the highest standards of professional competence of practitioners in the Nigerian tourism and hospitality industry.