HOLDING ONTO GOD SHOULD BE THE WAY TO RETIRE – REV PAM 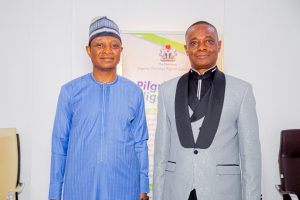 The Executive Secretary of the Nigerian Christian Pilgrim Commission, Rev. Yakubu Pam has said that holding onto God should be the way to retire from service. He made this disclosure recently in Abuja during a send forth for the NCPC Director of Special Duties, Sir Peter Okhueleigbe on 8th February, 2022. According to him, “A man who is going on retirement should hold onto God, likewise a man who is also coming in, should equally hold onto God for protection, because it is only God that will give you protection.”

Rev. Pam described the retiring Director of Special Duties as a man who is strong, bold, expressive and intelligent. In his words, “Peter was one of the staff that approached me when I became the Executive Secretary to brief me on the happenings in the Commission”.

He further added that the Commission has had three Executive Secretaries and the retiring Director has served under them. He acknowledged Sir Peter contributions by asserting, “You have passed through the good and difficult times under different Chief Executives. I am happy because that has made you who you are.”

The NCPC Chief Executive urged the retiring Director to be thankful to God for finishing well and healthy, stating that most people would want to be in his shoes but they may not be very lucky and fortunate like him to see this day.

Earlier, the Director of Administration, Mr. Barnabas Ali thanked all the staff for coming out to celebrate with the retiring Director as he comes to the end of his career in public service
He started that the retiring Director has been successful in his field as a fellow of the chartered institute of Accountants. In his words, Peter is one of the most successful staff of the Commission in Account Department and the Commission has benefited from his wisdom”.

Speaking during the send forth, the celebrant, Sir Peter Okhueleigbe thanked God for giving him good health to successfully retire from service and thanked all who worked with him throughout his active time in the Commission.

He further thanked the Executive Secretary for his style of leadership, urging staff to continue to work in peace as one family.

It would be recalled that Sir Peter Okhueleigbe had served NCPC in different capacities, he was once the Zonal Coordinator of NCPC South East Zonal office, Enugu, Head of Account and finance Department and was also the Director of Special Duties until his retirement on this fateful day, 8th February 2022.