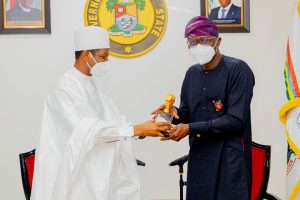 The Executive Governor of Lagos State, Mr Babajide Sanwo-Olu has bagged the best sponsor of Christian Pilgrims’ Award in South West in the 2020 NCPC maiden Pilgrimage to the Kingdom of Jordan which took place between July to September,2021.

The award was formally presented to the No 1 Citizen of Lagos State by the Executive Secretary, Nigerian Christian Pilgrim Commission, Rev Dr Yakubu Pam during a sensitisation visit to the Governor at Lagos House, Marina on 7th January,2022.

The NCPC boss reiterated that the Commission embarked on its 2020 maiden Pilgrimage to the Kingdom of Jordan and recorded landmark success in the area of zero abscondment, zero mortality and zero morbidity.

To this effect, the NCPC helmsman said that the Lagos State Governor was among the Governors who sponsored a large chunk of Pilgrims to the Holy Land of Jordan.

The NCPC Chief Executive stated that the award was to encourage the Governor for his support to NCPC and Christian Pilgrimage in general. According to him,” we want the world to know that you have done a lot for the church”.

Rev Pam stressed that Pilgrimage is not just about executing projects, but is divine and those who sponsor pilgrims to the Holy Land stand to gain spiritually. Thus, by this award,”we are telling you to do more,” he said.

He informed his host that the Commission would commence the 2021 main Pilgrimage to Israel, Jordan and Rome from February 2022. He further disclosed that Israeli authorities would soon open their borders to international travels but with a caveat that every intending Pilgrim must be fully vaccinated.

Rev Pam further hinted that the Commission would embark on State of Readiness visit to Israel on 26th January,2022 preparatory to the commencement of the 2021 Main pilgrimage exercise.

He revealed that intending interested Pilgrims would have the opportunity of Visiting Rome as the Commission would dedicate a batch for intending pilgrims who would want to visit Rome. He urged the Governor to be part of leaders who would be in Rome to pray.

The NCPC boss also stressed the need for fervent prayers for this year being a year with so many political activities.

He commended the Governor for his infrastructural development in Lagos. He particularly commended the effective and efficient manner in which he and his team handled and contained the global COVID 19 pandemic in Lagos State. He also commended him for the level of wisdom and maturity which he handled the ENDSARS protest in Lagos.

Responding, Governor Babajide Sanwo-Olu commended the visionary and purposeful leadership of Rev Pam this one year and half in the saddle. He further commended the Commission for the feat it achieved with the success story of its maiden Pilgrimage to Jordan even in the face of the global pandemic.

Governor Sanwo-olu explained that despite the initial skepticism about the Jordan Pilgrimage, being the first time ever, ” God gave you the strength and wisdom to execute the plans”.
Mr Governor thanked the NCPC boss for his kind words and commendation on the good work his administration had been doing. He stressed that the cardinal objective of his administration is to give the people renewed hope of better life .

He affirmed that governance started in the Bible and therefore leaders should be humble with leadership so that the people could be better citizens and live a fulfilled life.

He promised to step up his effort in terms of sponsorship of Pilgrims and would do everything possible to ensure the state maintains its leading position in the South West.

In the words of the Governor,”we want to assure you that we will give you the needed support,we will continue to do our best to ensure that the real essence of pilgrimage is achieved and do everything with conscience.
Submit a Comment