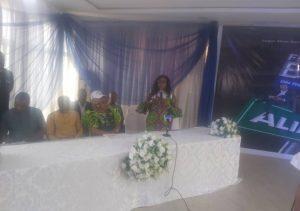 Peace Anyiam-Osigwe, founder of Africa Film Academy (AFA) addressing the public during the launch of the film making training for youths in Badagry, Epe and Alimosho

The Lagos State Government and the Africa Film Academy (AFA) on Wednesday launched a filmmaking training for youths across three divisions of the state, Epe, Badagry and Alimosho.

Mrs Uzamat Akinbile-Yusuf, Lagos State Commissioner for Tourism, Arts and Culture,  during the ceremony tagged, “Film in a Box, on the Field”,  held in Lagos, said this was to deliberatly convert youths’ restiveness into productive ventures.

Akinbile-Yusuf said that the state government had partnered with AFA to train no fewer than 600 youths in those locations in the act of filmmaking and exploring different aspects of it.

She said this was to identify the raw talent from the youths and train them to be the best to further improve on the industry.

“This is a continuation of our efforts to discover, encourage and nurture talented creative youths of this state, who can favourably compete globally in terms of content and technical know-how in film production.

“As we all know that the youth population is the strength and vigor of the society, this explains why Gov. Sanwo-Olu gives premium attention to youth related initiatives, especially through capacity development.

“The state government is making frantic efforts to address the growing and increasing unemployment rate across the country.

“Also, the effect of unemployment on Lagos state being the commercial nerve centre of the country and home to most Nigerians who have migrated to the state in search of greener pastures,” she said.

The commissioner said that the youth were not only the future of tomorrow but part of the plans of today which must be carried along in each of the state’s developmental plans, programmes and projects.

She said this was important to achieve the needed balance in the society.

According to her, in addition to having physical class training, there will also be an integral online component of the training where participants will collaborate and exchange ideas digitally away from the classroom.

“This will in no small measure, stimulate the economy of the state in the long run,” she said.

Akinbile-Yusuf noted that the ministry had also taken into cognisance the need to get disadvantaged women and out-of-school girls to be part of the programme.

She said the ministry would also be working with Non Governmental Organisations (NGOs) such as the International Women Society (IWS), local organisations and community groups to make this a reality.

“This partnership will leverage the value that AFA placed on talents and integrate them within the motion picture industry with enduring partnership developed over the past twenty years.

“This training programme, we believe, will further encourage our youths in using their immeasurable intelligence and creativity to initiate better life and  comfortable future for all, which is part of the dream and vision of Gov. Sanwo-Olu,” she said.

Earlier, Mrs Peace Anyiam-Osigwe, founder, AFA, disclosed that the training slated for six weeks would commence June 13 as over 100 interested youths had registered.

According to her, the training will encompass film directing, acting, lighting, sound production and actual marketing of films.

“After the training, they will be made to work together in themes, we will ensure they understand the business side of filmmaking, there is the show business and the film business.

“At the end of the training, they will be producing a film around the three locations,” she said.

Keppy Ekpenyong-Bassey, Director of Studies, AFA, noted that experienced facilitators would be engaged in training the youth.

Also, Tony Ami, Director of Administration AFA,  urged the youth to come out and empower themselves to be financially independent and self reliant at the Lagos Theatre in Igando.

He appreciated the state government for recognising the creative industry at a time when youth restiveness was on the high side. (NAN)