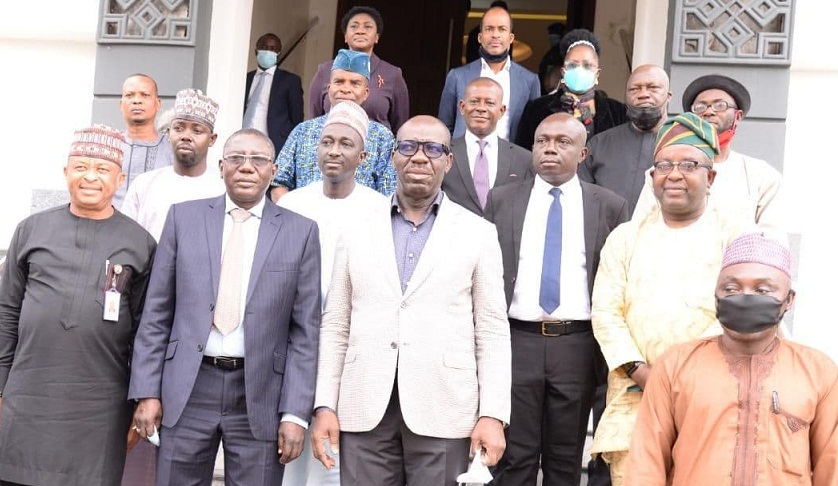 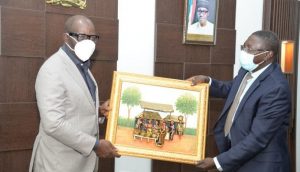 The Executive Governor of Edo State, H.E Mr. Godwin Obaseki made this pledge while receiving an NCMM delegation, led by the Director-General – Prof. Abba Isa TIJANI in his Office at the Edo State Govt House in Benin.

The Director-General who was on an official tour of museums and facilities in Benin and Asaba paid a courtesy call on the Governor and spent quality time with him discussing their shared vision of actualizing an economic rebirth of Benin City as a hub of Cultural tourism in Nigeria, and West Africa.

Governor Obaseki who was full of admiration for the Director-General expressed delight for the Director-General’s good works and positive strides since his assumption of office. He was particularly excited at the DG’s assurance of NCMM’s unflinching support for the establishment of the proposed Edo Museum of West African Arts
(EMOWAA) – a new museum to be built in Benin City as a result of various deliberations of the Benin dialogue group which consists of participants from the Benin Palace, Edo State Government, the NCMM, and other leading European Museums.

EMOWAA, is projected to be a world-class museum in the heart of Benin City that can house and showcase returning and existing Benin Bronzes and other important cultural items from across West Africa.

Prof. Tijani assured the Governor of NCMM’s readiness to support the EMOWAA project and proposed an architectural concept that fuses together, both the existing and emerging museums in a way to complement one another.

He posited the concept of a museum that will reflect a perfect cultural complex and tourist destination that will enrich visitor experience to the fullest.

Governor Godwin Obaseki who was excited and pleased with the Director- General’s pronouncements pledged his unwavering support for programmes and activities of the Commission in Benin.