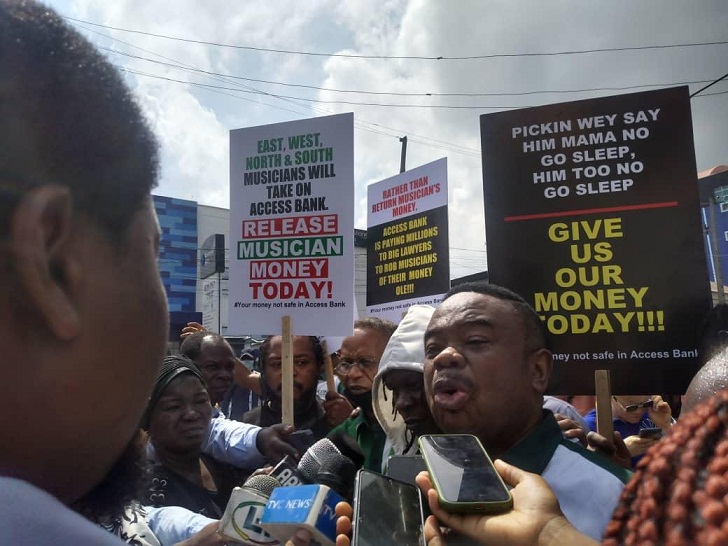 The Copyright society of Nigeria (COSON) on Monday urged Access Bank to release musicians royalities paid into the bank over 4 years ago.

Chief Tony Okoroji, COSON’s Chairman made the call during a peaceful campaign held from COSON House in Ikeja to Access Bank located at Opebi axis of Lagos.

Okoroji said that this had become necessary because Access bank had ignored letters written to the bank ordering the bank to credit the musicians.

He noted that the money was over N100million which was seized without any reason.

“It will be recalled that Justice Yellin Bogoro of the Federal High Court, Lagos, in a celebrated judgment, recently ordered Access Bank to immediately unfreeze the bank accounts of COSON and to pay COSON N70million naira in damages for unlawful freezing of accounts.

“Despite the order of Justice Bogoro and an earlier decision in 2019 by Justice Hassan, Access Bank has continued to withhold COSON’s funds which has resulted in the storming of the bank.

“Written instructions given to the bank by COSON to pay earned specific royalties to several musicians have also been disobeyed by the bank.

“We are peaceful people but it is sad to know that these musicians are dieing of poverty, we have lost two of our board members in the course of this strughle, this cannot hold again in a democratic dispensation,” he said.

Okoroji assured that even with this development, COSON was still functioning well, and will not collapse but will continue to grow.

“We will continue to make the music pay for artistes, we are transparent and organised,” he said.

One of the musicians that was present, Kenny Saint Brown described the development as disheartening and an act of injustice and oppression from Access bank.

“On no account should a band hold on to customers money, we are in a situation where our members think COSON is fraudulent because we are not sharinf royalties.

“We want the ban over our money in access bank to be lifted and the the musicians enjoy their money in health,” he said.

Some of the musicians that were present were: King Wadada, Kenny Saint Brown, Jarney and more as they also performed during the campaign.(NAN)