CIVIL SERVICE IS THE ENGINE ROOM OF GOVERNMENT – NCPC BOSS 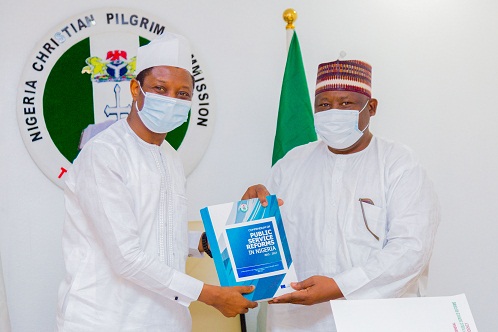 The Executive Secretary of the Nigeria Christian Pilgrim Commission (NCPC), Rev. Yakubu Pam has said that the Civil service is the engine Room of Government. He made the disclosure recently in Abuja while receiving in audience the Director General of the Bureau of Public Service Reforms, Mr. Dasuki Arabi.

He described the role of the Bureau as strategic and which would help to improve the service of Agencies of government.

Rev. Pam intimated Mr. Arabi that the Commission is saddled with the responsibility of coordinating and supervising the movement of Christians from Nigeria to Israel and other Holy sites around the world.

He Further stated that one of his six point Agenda on assumption of office is to fight and eradicate corruption especially by strengthening the procurement process of the Commission to meet with national and international standards.

He also reiterated that among other focal points of his administration is to build good relationship with Strategic Stakeholders as well as Reorientation of the mindset of intending pilgrims who are expected to be fantastically transformed after embarking on the spiritual journey.

The NCPC boss commended the Director General and his team for the good work the Bureau is doing.

Earlier, the Director General of the Bureau of Public Service Reforms, BPSR, Mr. Dasuki Arabi informed the NCPC Boss that his Agency was set up in 2004 to carry out positive reforms in all Agencies of Government. He explained that the Bureau helps government Agencies to do better and serve as the engine room for reforms.

He stressed that citizens access service by coming in contact with parastatals, hence the need to interface with the Commission on how to assess and improve on what NCPC is doing.

Mr. Arabi also informed the NCPC boss that the Bureau was working with a national strategy on public service reforms and has developed a self assessment tool.

The Director General Commended the transformation that had taken place in the Public Service since 2004 which include; the introduction of the Single Treasury Account, TSA, Integrated Personnel and Payroll Information System, IPPIS which according to him has eliminated ghost workers by 80 percent, amongst others.

The Director General of BPSR was accompanied on the courtesy visit by his management staff while the NCPC Director of Administration, Mr. Barnabas Ali participated at the meeting.