CELEBRATION OF UAE 50: ETIHAD COLLABORATES WITH LOCAL TALENT TO SHOWCASE THE ‘VALUES THAT UNITE’ 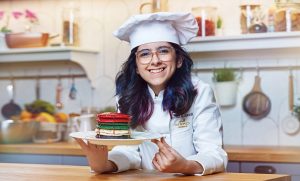 Etihad Airways, the national airline of the United Arab Emirates, today launched the latest in a series of initiatives celebrating the UAE’s golden jubilee year. The airline has collaborated with the youngest Emirati chef, an author, ice-skater, artists, and musical performers to curate unique works to commemorate the special anniversary.

“We’ve taken the UAE’s 50th Anniversary to our heart and challenged ourselves to work in conjunction with Emirati talent to showcase the unique spirit of the UAE to the world,” Amina Taher, Vice President Brand, Marketing and Sponsorships, Etihad Airways, explained.

“As the second phase of our year-long UAE 50 celebration, the project aims to raise the profile of the UAE as a hotspot for culture and art. Each expressionist will spotlight one of the UAE’s values of inclusion, resilience, honesty, creativity, inspiration and passion. We hope these heart-warming collaborations will inspire future creators and elevate Abu Dhabi and the UAE’s place on the world’s culture-map,” she continued.

Aysha Al Obeidli, 13, dubbed ‘the youngest Emirati chef’, has taken social media by storm after being crowned KidZania® Dubai’s 2018 Minichef. Aysha and Etihad have formed a unique and inclusive collaboration to create a delicious dessert to be served with Etihad’s children’s meals on flights over the UAE’s National Day weekend.

Aysha’s video launches on Etihad’s social media channels today and will be followed by stories with five more artistic collaborators over the coming weeks.

Next flying the artistic flag for Etihad, and representing the value of honesty, will be Abdulla Lutfi, a dynamic young artist who has created five works of art in his trademark playful black and white style. Abdulla’s distinct drawings of the UAE’s skylines and landscape usually feature an exaggerated humorous glimpse of everyday Emirati life. As an artist on the autism spectrum, Abdulla uses his perspective to communicate a powerful message and view of the world that is frequently not represented. Each of the five pieces of art details a different decade in the history of the country and the series will be on display in Abu Dhabi later in the year.

Over the coming weeks, Etihad will also showcase collaborations with other Emirati leaders. Multi-award-winning Emirati painter, Abdulqader Al Rais, who pioneered the arts movement in the UAE, will produce a unique work of art in his abstract style which combines geometric shapes with Arabic calligraphy.

Zahra Lari, the five-time Emirati national champion figure skater and the first Emirati figure skater to compete internationally, will showcase her sport. Zahra, from Abu Dhabi, will release an instructional video to inspire young people to take up ice-skating, and more importantly to influence young people to never stop chasing their dreams.

Children’s author and illustrator Maitha Al Khayat will capture the stories of Etihad to aspire children to work in aviation one day. Her illustrated book will be published around the UAE’s National Day.

The final collaboration is with a talented member of Etihad’s cabin crew and will be revealed in September.

This campaign follows on from Etihad’s ‘Legacy of a Nation’ initiative launched in June which curates heart-warming photos and stories of the UAE from the past 50 years. Both citizens and residents participated and shared almost 1000 stories with the airline, and 50 selected stories are showcased on its website.