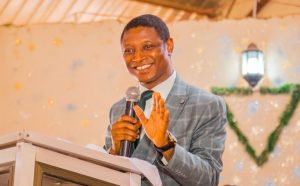 The Executive Secretary of the Nigeria Christian Pilgrim Commission, NCPC Rev Yakubu Pam has revealed that the President of the Christian Association of Nigeria, CAN, His Eminence Dr. Samson Ayokunle would serve as the Spiritual Leader of the Pilgrims for the 2020 maiden Pilgrimage to Jordan.

The NCPC boss disclosed this in Jos on 18th July, 2021 during the inauguration of officials of 17 Districts of the Christian Association of Nigeria, CAN Mangu Local Government Area of Plateau State at the Evangelical Church Winning All, ECWA, Mangu.

Rev Pam also intimated that the Secretary to the Government of the Federation, Boss Mustapha would be one of the high profile dignitaries that would grace the Commission,s flag off ceremony at Yakubu Gowon Airport, Heigpang, Jos on 24th July, 2021.

He explained that the maiden Pilgrimage exercise to Jordan would be the first time ever that Plateau Pilgrims would be airlifted from Yakubu Gowon Airport, Heigpang Jos to the Holy Land.

The NCPC helmsman thanked the Executive Governor of Plateau State, His Excellency, RT. Hon Simon Lalong for ensuring that the Airport is ready for use. The NCPC boss preached on the topic,”God,s Ways of Rearing Future Leaders”, charged the newly inaugurated CAN District leaders not to dispise the days of little beginning; assuring them that God would surely prosper the works of their hands.

He encouraged them by using himself as a typical example of how God can lift a man of no background to something.
Rev.Pam who read his Biblical lesson from 1st Samuel Chapter 17 verse 17 admonished the newly inaugurated CAN officials to be humble and committed to the work of God and serve God and humanity diligently and faithfully.

He urged them to emulate David who served and love God with all his heart. He affirmed that David,s strength was tested in his humility. He therefore described them as “the David of our generation”. He further stressed that being future leaders meant that they should lead in all spheres of human endeavour without any limitations.

The inauguration of the newly CAN officials was graced by the Deputy Governor of Plateau State, Prof. Sonni Tyoden and other dignataries.