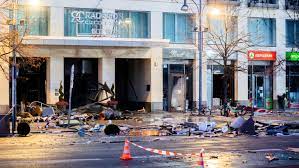 A giant aquarium containing a million litres of water in the lobby of the Radisson Blu in Berlin has burst, flooding the hotel and nearby streets.

Two people were injured by falling glass after the blast.

Police said there had been “incredible” damage. Video showed an empty tank with water pouring into the hotel lobby.

A spokesman for Berlin’s fire brigade told the BBC the vast majority of the fish had died, while the cold weather had made rescue attempts more difficult. The tank had contained more than 100 different species.

However, fire brigade official James Klein later told local media that “several dozen” fish had been found alive in places where residual water had collected. He said they were being rehoused in other aquariums.

Also, the Associated Press quoted officials as saying they were working to rescue another 400-500 fish in smaller tanks under the hotel lobby which had been deprived of oxygen because of the disaster.

Outside the Radisson Blu, a pile of debris lay in front of what were the front doors, which now hang into the street – twisted at an angle by the force of the exploding tank. (Source: BBC)