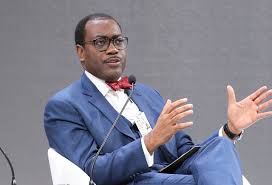 Adesina underlined the stark disparities between vaccine acquisitions by several rich countries that have acquired sufficient vaccines to inoculate their populations twice over, and African countries, that remain primarily dependent on the World Health Organization’s COVAX initiative for the minuscule quantities of vaccines acquired so far.

Speaking on CNN’s First Move with Julia Chatterley on Friday, Adesina said: “So far, 14.6 million vaccines have been delivered in Africa, but many people still cannot get shots in their arms. That is only 1% of what we need. We are way off the mark in terms of getting to 60% of herd immunity, and sadly, I do not see that happening for another year or two at this rate— not unless things change.”

According to Adesina, “We therefore need to improve Africa’s access to vaccines. COVAX is doing a great job but still, we need more. We need them in adequate quantity. We need them quickly and we need them at an affordable price.”

Acquiring vaccines has significant implications for African countries. As Adesina emphasized in a broader discussion with panelists at the launch of the African Economic Outlook 2021—including Professor Joseph E. Stiglitz, recipient of the 2001 Nobel Memorial Prize for Economic Sciences—for Africa, rapid vaccine acquisition is a matter of life and death. As elsewhere, Africa’s first priority is to prolong lives and preserve jobs.

From an economic perspective, Stiglitz agreed with Adesina that the slow pace of acquiring vaccines and arresting the pandemic will make stemming extreme poverty and negative economic growth difficult. They agreed that a comprehensive global plan was needed to help countries cope with mounting debt, which the pandemic had compounded.

Africa’s economy is expected to grow by 3.1% in 2021. However, 39 million Africans could be pushed into extreme poverty this year because of the pandemic unless the international community takes the kind of action that Stiglitz and Adesina are calling for now.

The African Development Bank chief says: “as long as Africans remain unvaccinated, the world will go right back to square one.” He said no amount of ‘vaccine passports’ being advocated for by some developed countries could change that fact.  “Africa needs to develop its pharmaceutical industry and begin manufacturing. The African Development Bank is going to support African countries to do this,” Adesina said.

Supporting this position, Stiglitz said in his conversation with Adesina: “One of the things that some of us have been campaigning for is the suspension of the intellectual property rights related to Covid-19 because the supply constraint that you describe is at least, to some extent, artificial… If access to the intellectual property rights were more extensive, there is throughout the emerging markets and developing countries considerable capacity to produce a lot of more vaccines.”

He added that it was in the self-interest of advanced countries to make sure that everybody has access to the vaccine and other related medicines. “The longer the disease festers in any part of the world, it can mutate and one of the things we know is that those mutations are not going to respect borders. The Covid-19 virus doesn’t carry a passport.”

Other notable African voices that have called for speeding up vaccine delivery to Africa are those of South African President Cyril Ramaphosa, WHO Director General Tedros Adhanom Ghebreyesus, and Director of the Africa Centres for Disease Control and Prevention, Dr. John Nkengasong.