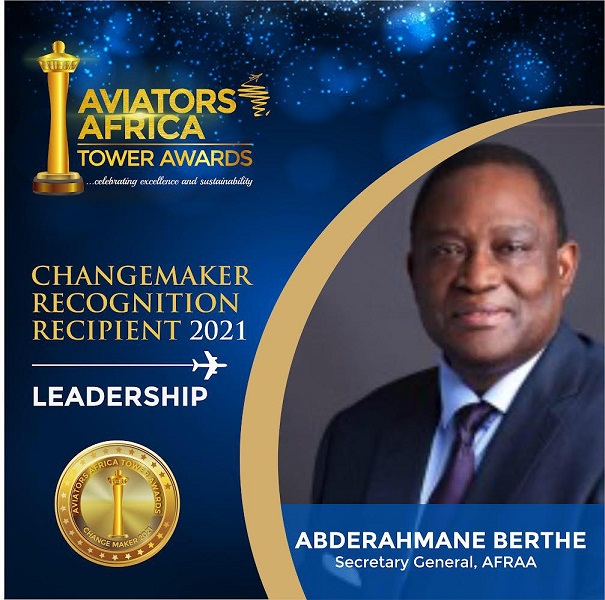 The Award was presented at the Aviators Africa Tower Award ceremony that took place at the 3rd Aviation Leadership CEOs Forum on 27 October 2021. The event was attended by aviation executives and industry leaders across Africa and beyond with the objective of changing the narrative around decision and policy making in Africa.

Speaking at the award ceremony, Mr.Berthé said:“Leadership is most successful when it relies on a good team. I dedicate this Award to the Executive Committee of AFRAA, the members of the Association and the AFRAA Secretariat team, in appreciation of their valuable support to my efforts since at the helm of AFRAA which have culminated to being ranked as a corporate leader in the African aviation industry.”

“This Award further emphasizes AFRAA’s leadership to represent and serve African airlines as we work closely with our members, partners, industry organizations, governments and stakeholders,” he added.

The Changemaker Award category was presented to individuals who have contributed immensely to the growth of African Aviation. This is in a bid to foster new thinking and promote healthy competition, originality, and creativity, for sustainable growth in the sector.

The Tower Awards recognise, celebrate, and honour excellence as well as sustainability within the African Aviation sector. the Tower Awards are positioned to be the foremost annual aviation event where airlines, airports, and the aviation value chain are celebrated in Africa.

The awardees will be inducted into Aviators Africa hall of fame.